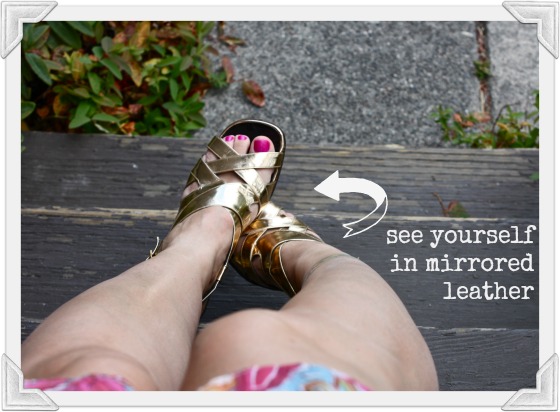 I saw myself in mirrored leather. Slipping these vintage babies on, I became a gleaming golden goddess, gliding over city concrete. At one with nature in my floral summer frock, I toss my hair, goddess like, and it falls back perfectly in place. Birds sang overhead, and I could freely wander the universe, unaffected by the din of traffic, tooting horns, car alarms and the dusty perfume of exhaust farted out by the backsides of scampering cars. As a goddess, I am immune to the mundane, the messy kitchen counters, late book return fees, and the fact I might be 15 minutes late to work. You see a goddess has not time for these trifle concerns.

A goddess gleams. And that takes up all her time.

Until you miss the bus, get a toe blister, feel tired and hungry, or decide that those dirty coffee cups ain't going to wash themselves.

READ MORE AFTER THE JUMP
22 comments:

I took this photograph of my friend Mary while she was visiting last week-end. When we came upon this grand statue of Viking hero, Leif Erikson, it seemed the natural thing to do as a tourist, was to pose next to it. As I took some photos of Mary, my boyfriend snapped a a couple of me on his camera phone. I kind of liked the behind-the-scenes glimpse - a story in a story, if you will,  captured in a picture.

I hope you do too. 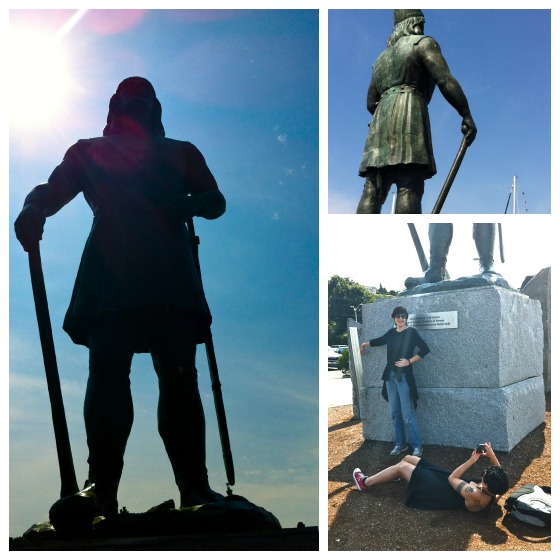 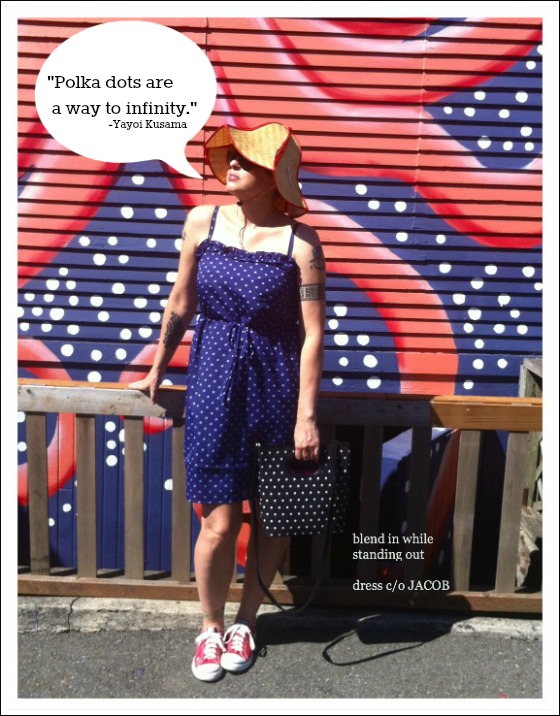 I wore this easy wearing navy blue polka dot frock from JACOB the other day, when I went to meet my friend Mary at the airport. She's visiting from my hometown, and I tried to show her the grandeur of my new city, Seattle. Seattle was dolled up in the most charming weather, all sunny and glorious, with birds singing and flowers blooming and everybody smiling. Bells and whistles. All stops.

READ MORE AFTER THE JUMP
36 comments:

"Except for the point, the still point, there would be no dance, and there is only the dance."-T.S. Eliot, Burnt Norton 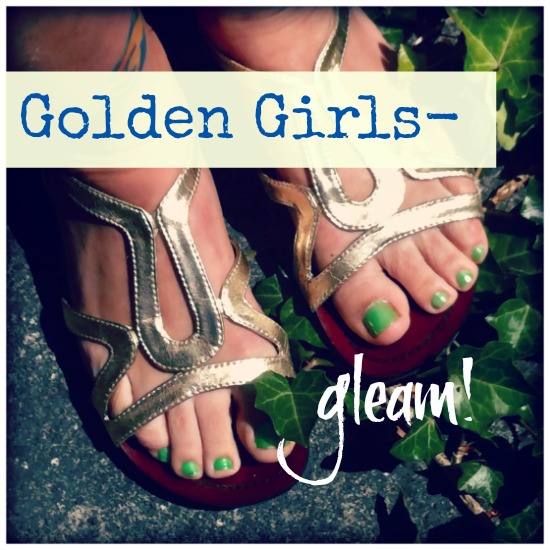 What is it about shiny gold shoes?

I've been fond of them since high school (which was back before the days of Zeus + Mt. Olympus, and cell phones) where I learned of the invisible fine line on wearing bright gold shoes- somehow your shiny hooves can veer from "goddess slippers," and slide into the gaudy category of "hooker shoes."  Gold shoes have 2 flavors: high class or just crass. I owned two pairs of gold shoes: Espirit gold leather ballet slippers which rang regal when worn with just about anything, and a cheap brand of strappy gold stilettos.

Gold lame on tottering heels, I learned at age 17, when worn with anything flouncy or flirty (including the magenta jersey knit V-neck dress your mom stay up late night sewing) could come off as "trampy." At least according to three classmates, one History teacher, and a frowning high school principal. As one admonisher put it, I looked less "Saks Fifth Avenue", and more "Frederick's of Hollywood." In the big scheme of things, I learned that to feel golden, looking demure was preferred to shiny streetwalker winsome. READ MORE AFTER THE JUMP
41 comments:

Jack of All Shades? 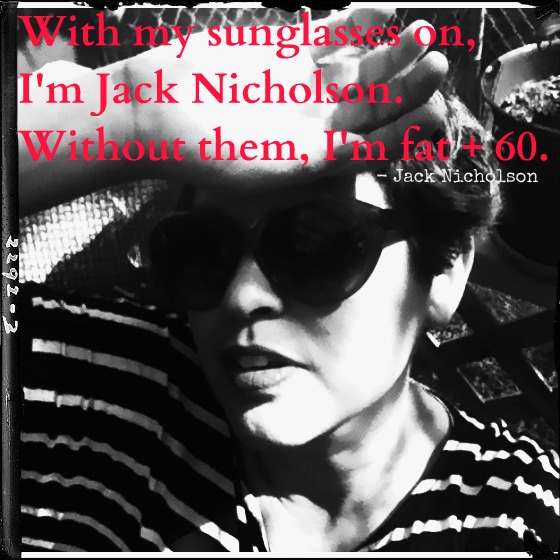 When you need to sport some attitude, you put on your shades. Just like Jack.

Thank you lovely peeps, for all your blog and Facebook comments, emails, and tweets regarding our challenge to showcase beauty/style in all flavors! I am so grateful to be a part of medium that can REALLY make a positive impact on our culture, and I'm thankful to all of you! We are making lemonade friends, so lets enjoy the fruits of our labors.

Fashion can be a way for you to express your personality.
Your expression of style can make the world a more beautiful place.
Variety is spice for life, so dress up, doll up, get up and enjoy your flavor!
We all win, when we take time to appreciate the diverse expressions of beauty.

And speaking of win,  the winner of the Polaroid sunglasses give-away courtesy of Sunglasses Shop is:

the ONE, ONLY, and the very lovely Clare of Miss Simmonds Says. I can't imagine a better winner of those cool Polaroid shades, so congrats to you dear Clare, and thank you Sunglasses Shop for sponsoring the give-away!

Money Where Your Mouth Is


Whoo-weee, peeps! What a fashion-blogger-roller-coaster we've been on! Broohau-ha and such forth, the IFB fiasco seems to be settling down, and we are left where we are.

And just where is that you ask?

Well, at a crossroads of sorts. I've said my piece (Rest In Peace, IFB.) And now it's time to move on.

As I stated before (probably many times) that it's good to focus on the folks who inspire our style, and celebrate the original. I've no intention of dissing anybody, I'd rather focus on some good ol' fashioned QUALITY peeps, who inspire MY style.

Looks like even "the mean girls" of Shamepuff got in on the action. Not satisfied with calling out bullshit on blogs, specifically fashion blogs, Shamepuff and its sister site Get Off My Internets, can dish the dirt, but they also can hand out some compliments. Not that long ago, on GOMI, was our very own Vintage Vixen, getting some words of praise in a venue usually reserved for scathing rebukes. Well, yet another +40 goddess, I mean blogger, elicited praise from the tough love GOMI crew. 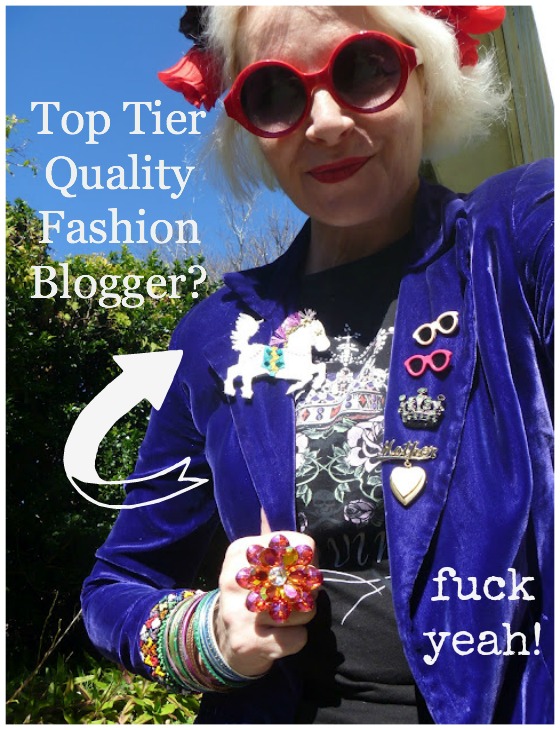 In a new feature christened PRIDEPUFF, the lovely Desiree got mentioned as someone to celebrate because of their true style. The comments, rowdily echoed the sentiment. Which proves to me, that just because someone criticizes something doesn't mean they are just shit-talking (or bullying!), they might just be as passionate as you about the subject, and this is a seriously blog-savvy (and sometimes savage) bunch,  BUT they they know their stuff. And, it seems they recognize QUALITY when they see it.


READ MORE AFTER THE JUMP
35 comments:

It's not YOU, it's me: an open letter to IFB 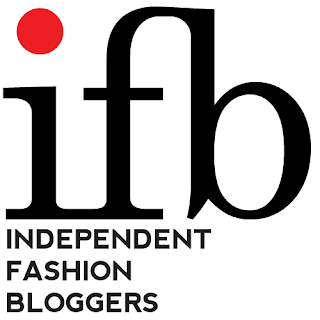 As an early member of IFB, I have long promoted you- I considered you a valuable resource, read and learned from your blog posts, and looked up to you as a network of community to meet like-minded fashion bloggers and talk shop. I didn't mind that you never seemed to look my way to feature me in the Blogger Spotlight- I loved many of your choices- in fact, I was an avid contributor in nominating bloggers who I felt offered quality and original  content, like The Clothes Horse, Another Day to Dress Up, Second Skin, and many others. I'll admit, once the focus switched to featuring the "PROFESSIONAL" bloggers, my interest waned a bit. While I discovered many interesting (and apparently financially successful) "bloggers," most of them, I couldn't relate to, perhaps they are too mainstream for my, uh, independent fashion taste. Some of them, didn't even make money, but hey, it's who you know right? I say, congrats to them for showing up on your radar.

I'll admit, I felt more and more frustrated with the network part of things, when the network became basically a vehicle for young wannabee bloggers to spam my IFB inbox with FOLLOW ME, CHECK OUT MY BLOG, AND ENTER MY GIVEAWAYS, ad nauseum. I tried not to resent YOU, dear IFB, for being unable or unwilling to stop it. You had bigger fish to fry- organizing your conferences, (which I attended one, by the way, and LOVED!) making sort of lame videos, I mean vlogs featuring your pet interns, and um, stuff. Like lining up more sponsors and sending out dedicated emails to your members, shilling those sponsors. But I get it, and I didn't blame you.

READ MORE AFTER THE JUMP
80 comments: 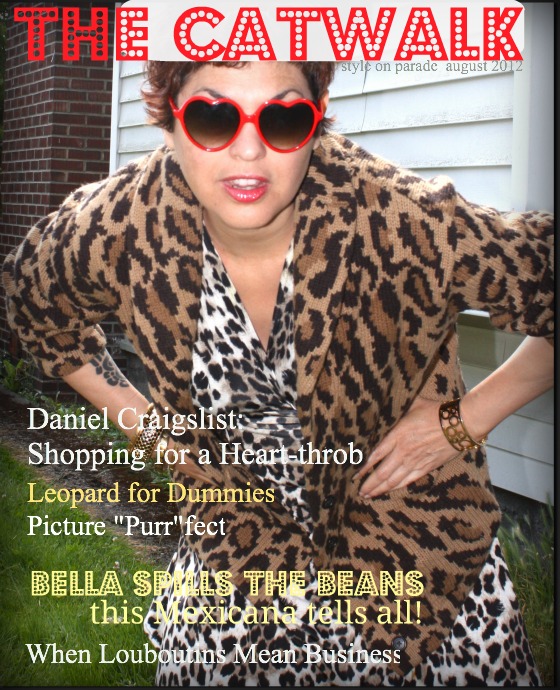 Ya'lls know I'm big goof right? Recently, I've been having a good time making these fantasy magazine covers with my favorite bloggers as the cover girls. It got my mind a thinkin' (dangerous) and my heart a pumpin'. I am so tired of seeing just the same ol', same ol' and CRAVE seeing a bit of real, and delicious diversity on some real magazine covers! Well, while I patiently wait for an Advanced Style maven/model to make the pages of Vogue, I'll keep playing with the Pic Monkey and make my own fun fashion layouts. Here's me, as flab-uous cover girl for a make-believe magazine called CATWALK. 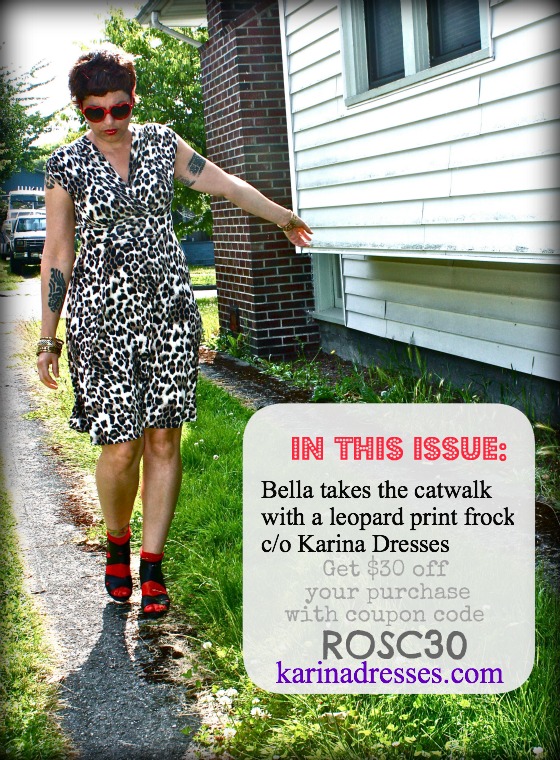 Can you picture it?
READ MORE AFTER THE JUMP
33 comments: 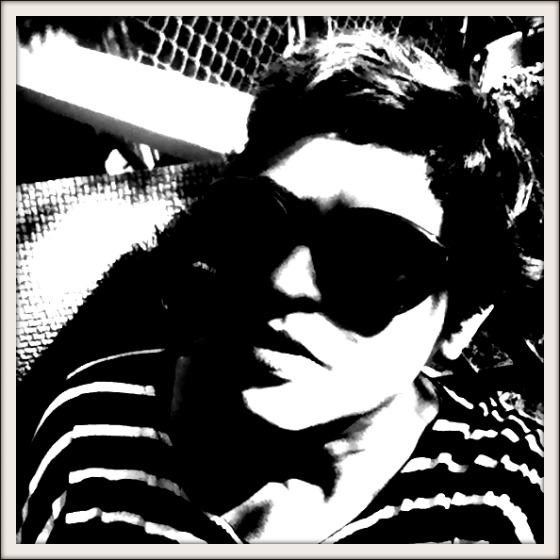 Ah, the allure and mystique of a pair of sunglasses. Put on a pair, and instantly be an icon of cool. At least, that's how it seems in my head. But is that how it works in real life?

READ MORE AFTER THE JUMP
20 comments:


“She was the height of glamorous eccentricity."
-
Dita Von Teese

Before you could read the headlines, the news hit the twitter feed last night: Anna Piaggi, fashion writer, former editor for Vogue Italia, everyday eccentric + fashion icon, passed away at the age 81. Fashion show front row fixture, and serious hat collector, Piaggi embodied everything marvelous about personal style: she was a lover of fashion, who transcended trends. You can read a more news-style report of her passing by clicking HERE. The Citizen expresses a heartfelt sympathy to Piaggi's friends, and family.

You can read some wonderful tributes to the glorious Piaggi style, HERE, HERE + HERE.

Artist Anne M Bray, aka Spy Girl has been working on an art series called Fashion Icon, and she's done some wonderful portraits of several fave bloggers (I'm looking right at you La Dama). Anne recently messaged me to tell me that I've been honored to join their ranks!

So take a looksie at this (quite flattering) version of me, as illustrated by Anne- I just LOVE it!

READ MORE AFTER THE JUMP
35 comments: