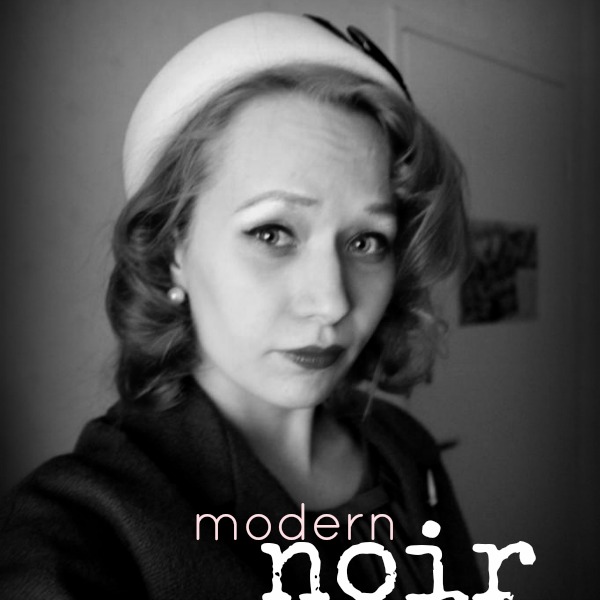 "When I start out to make a fool of myself there's very little can stop me."
-Michael O'Hara, Lady from Shanghai 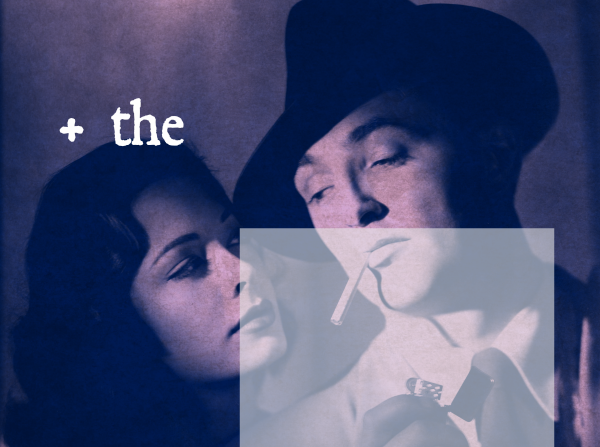 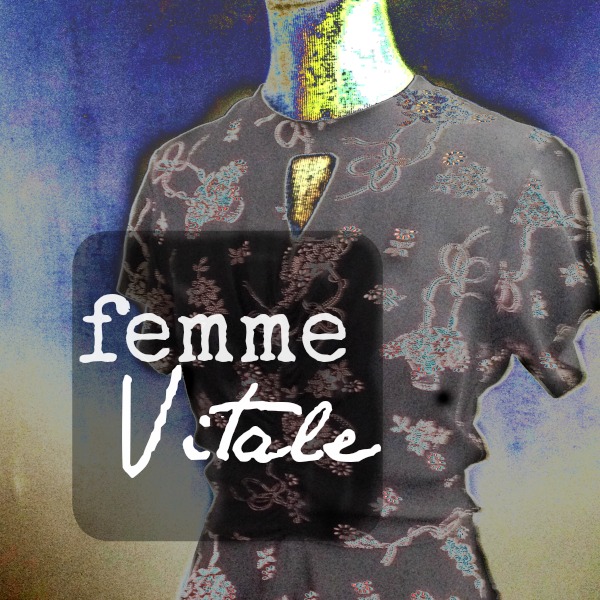 REEL LIFE. From the age of twelve, I've been a sucker for the genre of Film Noir. Ever since I first watched Laura on an old black and white T.V. one late afternoon in the living room of some baby sitter's, long since forgotten. Unforgotten was the mesmerizing tale splashed up on the T.V. screen, a man in pursuit of the truth, wearing an impeccably stylish suit, falling for an impossibly beautiful woman. It probably was the outfits that I fell in love with at first,  as I immediately took to the style of the 1940s, like a fish to a babbling brook. Then came the relentless re-runs of Perry Mason, shot in stark black and white, which I now recognize as rife with signature elements of Noir. 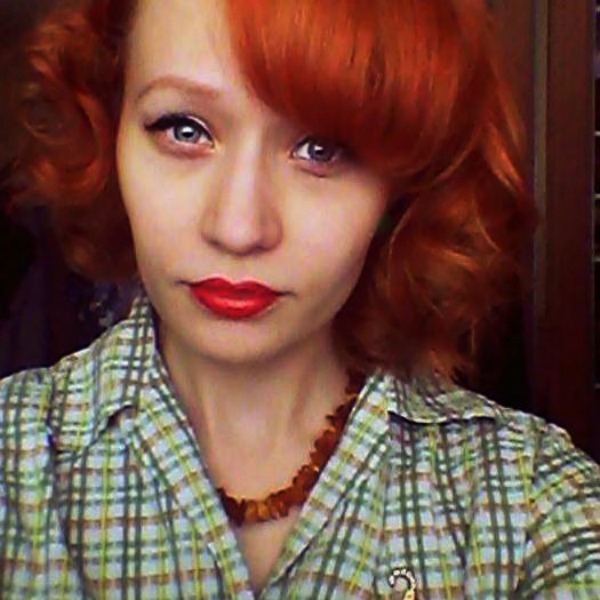 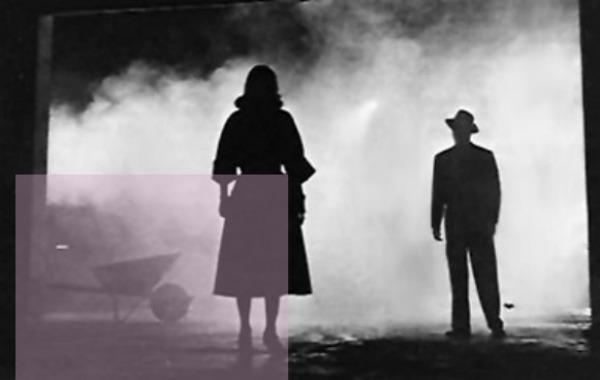 GENRE VS GENDER. Film Noir will always be an intoxicating brew of pulp fiction, a 20th century soap-boxed tales from the Round Table, with fast talking, gun toting, trench wearing private dicks standing in for Camelot's Knight Errant. It's a whiskey soaked, dream gutted male oriented genre, always told from a man's point of view. It's heavily stylized, a modern fable of sorts, spun from the same dark stuff that made up old fairy tales, relayed in a sharp bark of a tabloid headline. It hardly seems surprising that this time-locked early 20th century genre can still reflect a mood found in our present day. POV + THE PRIVATE EYE. Asphalt Jungle, Night in the City, Out of the Past, and Maltese Falcon conjure up the grime and grit, and desparate reach of those who dare dream beyond their everyday means. The fashions of the 1940s are ambitious, offering the wearer an idealized facade in which to live their life. However hopeful, the protagonist, nearly always a working class man, is tempted by his own version of fruit plucked from modern day Tree of Knowledge, usually in the guise of a fallen angel.  Dolled to the nines, beguiling and elusive; she's a siren of desire, triggering in the hero, a host of hungry wants and hopes.  She is the unholy grail for the modern knight, with that angelic face hiding the many devil-may-care ambitions of her own.

For once, I wish we could update this archetype, and rewrite a female character of the genre into somebody I could actually relate to. Why not give the lady an occastional center stage, and re-write her as the main character, a heroine in and of herself?  What would change in the tale, if we were to see the story exclusively through the eyes of the leading lady, not as a siren, but as the sharer of the tale? How would the plot play out, if told through the eyes of Stanwick's Kathleen Howard, or Hayward's Elsa in the Lady from Shanghai? 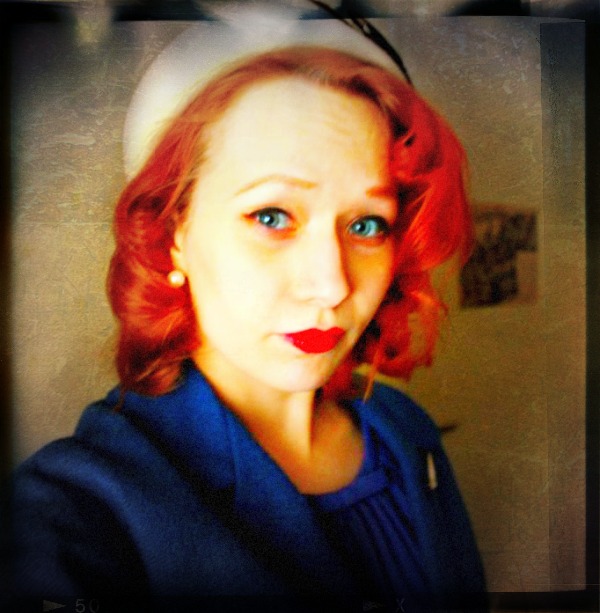 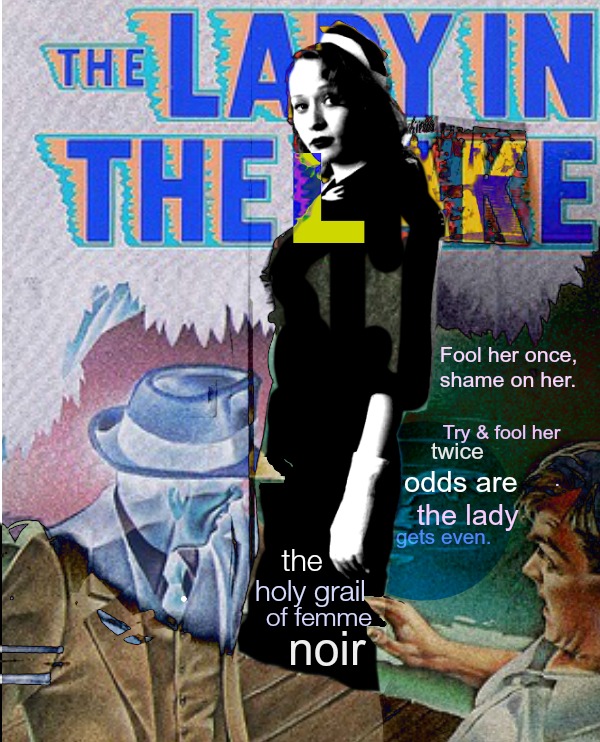 NOIR BY THE LIGHT OF DAY. I am so ready for a new Noir, one that loosens the corset of the women who live in its cities. Let's call it Femme Noir.   This new heroine exists beyond the shadowy projections of men's desires. She needn't rely on a masculine rescue, being smart and lucky in her own right, who in spite of all odds, will manage to get even. She has her desires too, but they are no longer portrayed as a series of webs and traps for men. This femme is not made from the stuff of downfalls, but of upswings. It would be a new hue of women to Noir, coloring beyond the constricting palette of victim or vixen.

LONG LIVE NOIR. The Femme Fatale is dead, not that she ever really existed. As beautiful as the look of Noir will always look to me, how much more invigorating it could be if we could put new life into the women of the genre. Enter the Femme Vitale:  a sweet but tough cookie, beautiful as midnight, but bright as the light of day. Scrappy, loyal, resourceful, rather than needing a man for rescue, our new Noir heroine would be the linchpin for a gritty but hopefully somewhat happy ending.

PULP DICTION. Of course adult fairy tales being what they are, the happiness could be served up dark and as bitter as coffee, and sans a whiff of saccharine.  Someone like Jennifer Lawrence, or Helen Mirren could play this new Noir woman, possibly playing opposite the likes of a Joseph Gorden-Levy, a James McAvoy or an Idris Elba. A girl can dream, can't she? I will go on record dreaming in the dark upon a silvery screen, for stories re-scripted into a heady mix of trail-blazing technicolor and woman-friendly black and white. 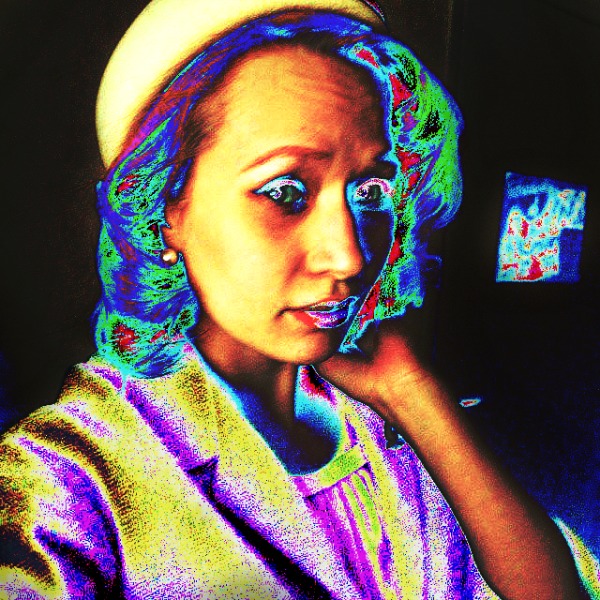 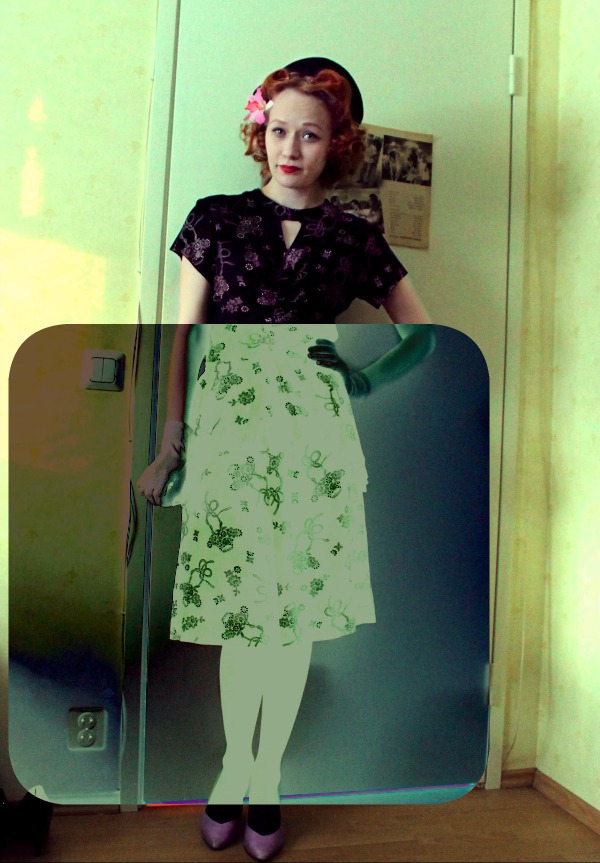 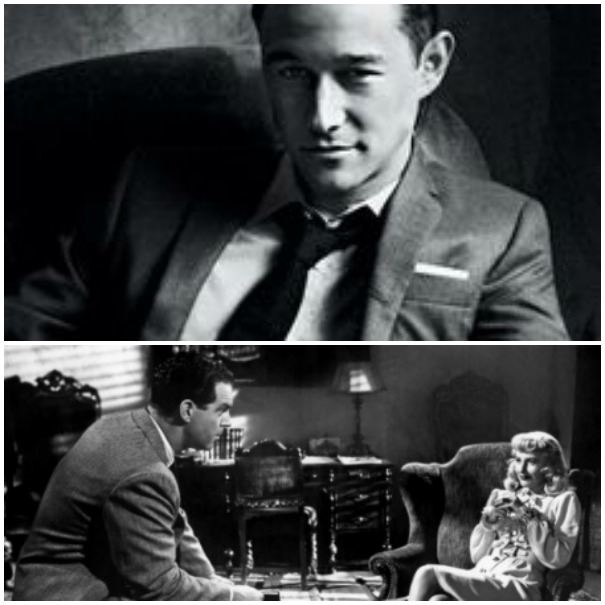 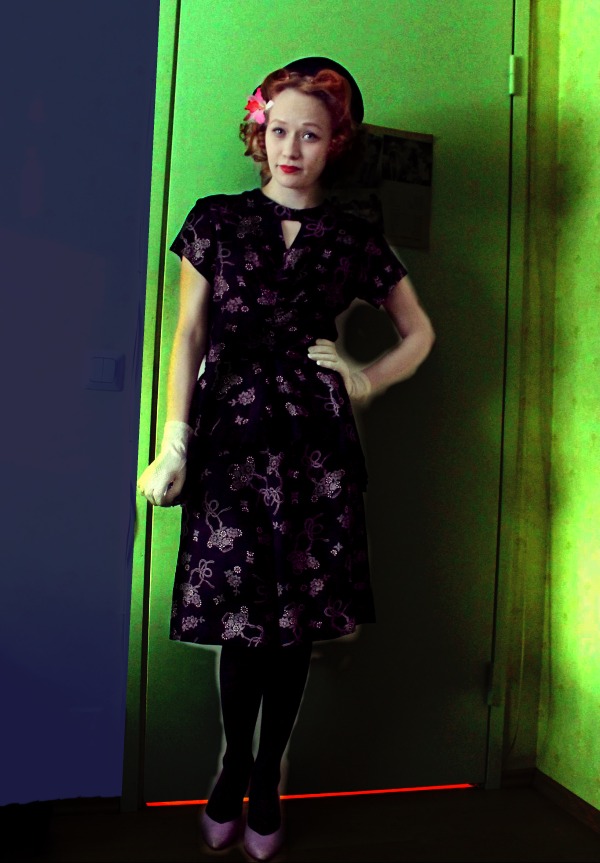 Film Noir and the Femme Fatale:
Noir, Misogyny and the Maltese Falcon
Personality Disorders and Film Noir's Femme Fatale
Femme Fatale Actresses of the 1940s
Dressed to Kill
No Place for a Woman: the Family in Film Noir
Movie Title Screens: Film Noir

Original photo collages were created by the Citizen Rosebud, using movie stills and original photography by Sara H. You can see Sarah and her beautiful vintage 1940s dress in her original post HERE. All digital art was created on Pic Monkey. 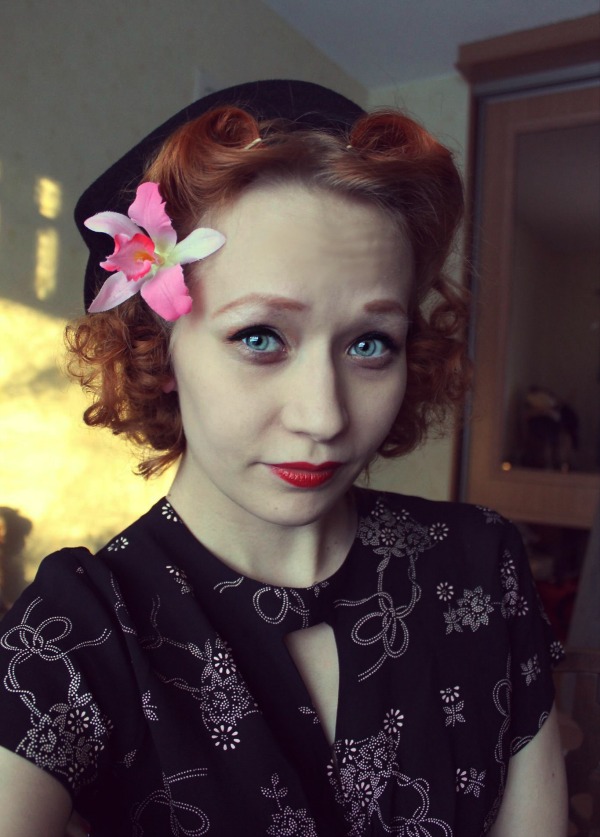 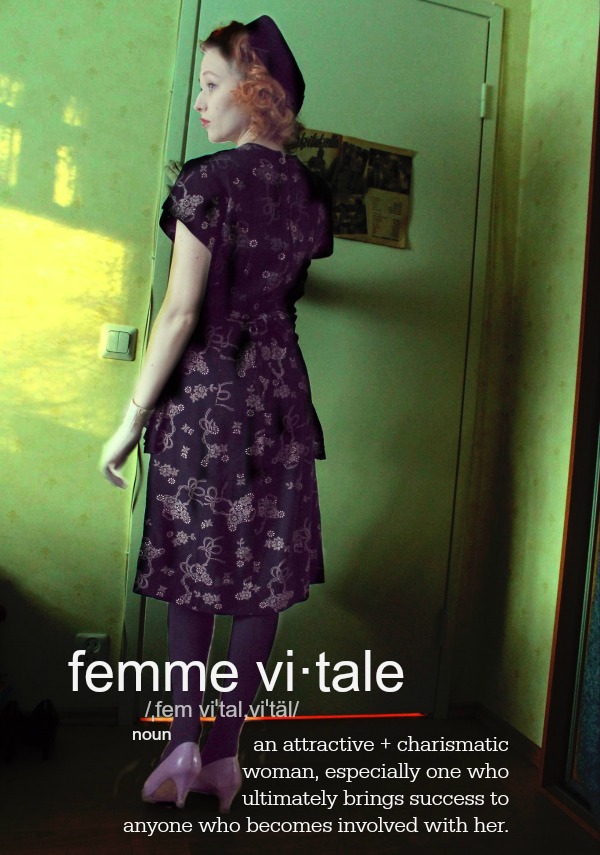 I'm a big fan of the genre too. Barbara Stanwyck, what a woman. Love these vintage dresses too. xox