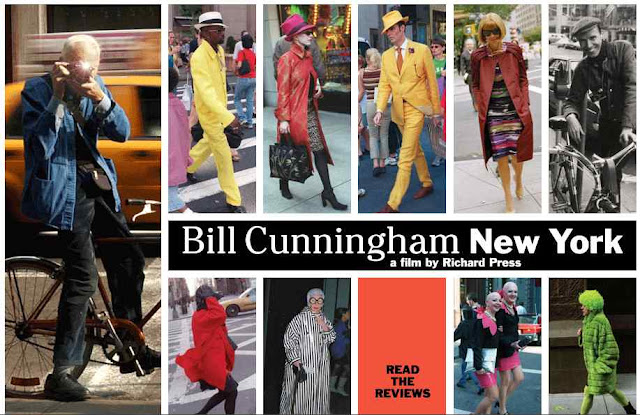 "We all get dressed for Bill," says Vogue editor Anna Wintour. The "Bill" in question is 80+ year old New York Times photographer Bill Cunningham, who for decades has been a Schwinn-riding cultural anthropologist obsessively and inventively chronicling fashion trends and high society charity soirees for the Times Style section in his columns "On the Street" and "Evening Hours." Documenting uptown fixtures (Wintour, Tom Wolfe, Brooke Astor, David Rockefeller-who all appear in the film out of their love for Bill), downtown eccentrics and everyone in between, Cunningham's enormous body of work is more reliable tan any catwalk as an expression of time, place and individual flair.  In turn, Bill Cunningham New York is a delicate, funny and often poignant portrait of a dedicated artist whose only wealth is his own humanity and unassuming grace.*

Opening this coming Friday at the Crest, is an exclusive Sacramento engagement of the acclaimed documentary, Bill Cunningham New York. This eagarly anticipated film will be playing from April 22nd through Thursday April 28th at the Crest Theatre, and I am so stoked that it is coming to Sacramento! This is the latest film in the Verge Center for the Arts quarterly screening at the Crest.

The opening night, which benefits the Verge Center for the Arts, begins with a Trunk Show in the Crest lobby featuring local boutiques and designers, including the the beloved Crimson & Clover, Bows and Arrows, Modaspia, Thunderhorse Vintage and Babyfloss. Along with the fun of shopping vintage and local designers,  as well as the premiere screening of Bill Cunningham New York, there will be a post-screening panel discussion with fashion bloggers, including Lorena Beightler of Sac Cycle Chic, Kari Shipman of Juniper James, Kerry Dolan (who is my co-founder of the Sacramento street style blog, Street Style SACRAMENTO,) as well, as...get this:  ME!

How I wish to be able to be there. You in the bloggers panel, how cool is that???????? ahhhhhhhhhhhh.You are famous!!!heheheheh
I love Bill, and all he stands for: They don´t pay me, so they cannot tel me what to do...Ahhhhhhhhhhhh. He is my hero!!
Have fun!!!
XXXXXXXXXXXXXXX

This sounds so much fun!! I would love to be there!! Please bring us all the coverage...and enjoy the experience! How cool is this!

Hi Bella, I can't wait to hear how you liked the movie. I'm also so excited for you to be on the panel! Yay!

Sounds like an amazing event. I really want to see the movie. I saw the trailer, and he seems so interesting. It seems like there are so many facets of him.
My Heart Blogged

I think it just started playing here in San Fran too, cant wait to see it! Hope your event is fun!

Gorgeous pictures ! I'd like to see that documentary !
http://selenite.weebly.com

Bella, I was at our local art-house-movie theater last night and they show the documentary previous and we were saying we can't wait to see it!
I remember seen his photos in the paper when I lived in New York!
You going have a busy week!

How fantastic that you will be part of the pre-show...and you will love the film. There was quote after quote from it I tried to remember for my blog. Bill is just a genuinely nice guy!

Very cool! Hope to make it!

Oh there WOULD be an event for the event in Sacramento. I had to schlub to the local run down art house and get funny looks from all the hipsters, meanwhile you're all having great fun and a trunk show and stuff. I'm jealous.

It is a great film though!

Love,
Heather
Those are called "fails". I love the translations. I always wonder if English is so hard to translate, and if there are blogs in other countries that find "fails" in their language in America.

Very cute! Have you really run out of things to complain about?

Congratulations on the panel position! That's so exciting. That film just opened in Toronto and I was invited to the pre-screening but was bummed that I couldn't attend! I can't wait to see it. Apparently Bill C is very humble and that is my favourite quality in anybody amazing.