I couldn't make it to our four day Sacramento Fashion Week this year, but going in my stead as special correspondent for The Citizen Rosebud was none other than textile artist/designer extrodanaire, Lindsay Rickman. Along with the newest style hunter for Street Style SACRAMENTO, photographer Morgan Hollis, Lindsay attended last night's Designer Showcase at the Elks Lodge. The following is her report:
Last Friday night, eight designers presented their latest collections in the first of a two-night event celebrating fashion here in Sacramento.  The first showcase  featured the designs of the hostess and emcee, Caren Templet.  Models wore navy blue turbans with navy suede heels, dresses, blouses and trousers all in white, with pearls, rhinestones and glass jewelry. It was a cohesive collectin, and it set an ambitious tone for the rest of the show. The major standout was a white faux fur jacket equipped with over-sized pockets casually thrown over a floor length silk chiffon gown.

The designers showcased were:
The last collection shown was by Amanda Chan. This seemed to be a deliberate choice as Chan's works was the most fashion-as-art of the whole show. The other designers presented collections with a more commercial appeal, and I don't mean this as an insult. But the other collections were designed to be more wearable, they were in short, fashionable, functional clothing. Amanda Chan's work did not, and that is part of what made it the most beautiful, to me. She had hand- made satin ballet slippers in light blues, pinks and greens. Her models wore two-layer organza sheath dresses, very simple, also in these colors, as a base for wearable wire and wood sculptures. Maybe these weren't the things that most anyone might wear to most cocktail parties, or to hop on a city bus to do some grocery shopping, but this was the sort of work that I'd been hoping to see, and it made a good finale. 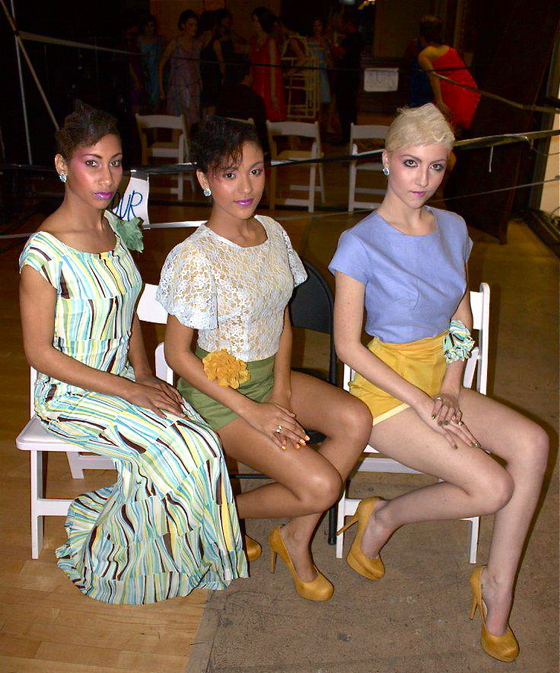 The fashion show were very current and on trend, there were playful uses of the materials and colors. From jersey, to silks and chiffons, the various looks lit up the runway in hues of blues, mustard, oranges, reds and salmon. There were some wonderful, comfortable shapes, on the whole simple and dressy/casual, clothes that I'd love be wearing. If the materials used in any of the collections seemed a bit limited, I'm pretty sure that it probably had to do with budget constraints, money and not time, because all of the designers obviously put a lot of time into their collections. Ask me to turn out a collection for ten or twelve models and I say I'll get back to you in two or three years. (This is the opinion from the point of view of an art-theatre-film-fashion student/ME!)

If you think it might not be worth your while to go to a mainstream fashion event, that you'll be bored to tears, think twice about that. Our hostess was very charming, warm and funny. She modeled three outfits for all of us. It's very clear that she cares about the fine and performing arts here in Sacramento, and wants to use fashion events as one of the platforms for getting as many people interested in these as possible. I say, these people are here tonite, instead of on theire couch, watching television, and that's awesome enough for me. So when I hear the ladies sitting in back of me snickering at the more avant-garde part of the show, and saying things like, "This is the WEIRDEST thing I've ever seen, " I think, well, at least she's here to see it.

I'm learning to appreciate all of the work that goes into making a good show/event even before the designers' models come out onto the stage. Magnum Opus, the company that produced the event did an incredible job organizing the event.  The show was well lit, and went smoothly without a hitch (at it appeared that way to me,) There was plenty of space for the professional photographers and their equipment. as well as comfortable seating for everyone else. Adding to the pleasure were the friendly, helpful staff for the event.  Good show, well done. I'll be back!

Lindsay Rickman is a Sacramento based textile artist/designer living in Midtown. She's fond of fashion. And Sacramento

Wish I could have attended!! Inspiration can be found in a myriad of ways. I'm guessing the attendees were fun to watch as well.

Can't believe you didn't get to go busy B! I love how inspiration can be tranlated into so many brilliant concepts... Can't wait to see more from the new style hunter!!!
Have a fab Sunday!

Wow. The clothes are like architecture. Bet it was a fun show to watch.

You get to go to so many fabulous events! I love seeing the more outlandish and avant-garde ensembles just for the drama.
That scaffolding structure is like an exaggerated form of the Victorian crinoline, fab for travelling on public transport without letting others invade your personal space! x

Fabulous show!! I agree with you that Amanda Chan's collection was the most attention seeking one.

Yes, I like the pieces where my reaction is, Whaaaa....? and then laugh. They are the most inspiring for me and I remember them the longest. It's like art on legs. The portable playpen by Amanda Chan is fantastic!