This cigar chomping gent is a pal o' mine who happens to be quite a funny guy. But looks aren't everything...(but-omp-bump) Kidding aside, Michael O'Connell REALLY is a funny guy. Which comes in handy when he's on stage, considering he's become a comedian.  He went onstage for the first time as a comic at the beginning of this year, for an comedy open mic, and he WON!

So far, he's won a few rounds of a local comedy competition at Tommy T's in Roseville, California. Lately he's been also frequenting one of my favorite downtown spots, Luna's Cafe, which has a comedy night every Wednesday, hosted by the incredibly handsome and witty Keith Lowell Jensen (and yes, he paid me to say that.)

When Michael isn't playing comic on stage, or smoking a cigar, he's probably writing. You can find him on a number of blogs, including his "official" website, MichaelOConnell.com. You can also read his late-night rantings on his "official" blog, Michael O'Blogger.  By now it's probably pretty obvious: Mike's a proud Irish-American. There are other obvious things, too, like what a natural he is on stage, doing his comedy bit. 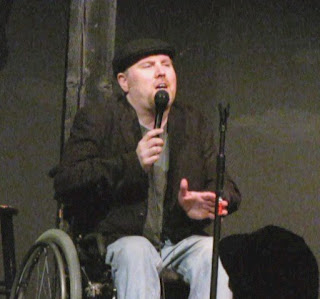 For the local yokels, I really hope you get a chance to see him in action.
You can view Michael O'Connell's upcoming shows on his comedy website, MichaelOComedy.com


For my out-of-towners, I took the liberty of posting a YOUtube video of a bit that was filmed from a recent show. Hope you like.

Amazing & so inspiring!
Laughter is the best indeed~

i agree with lenorenevermore, that this is so inspiring! love such people!

thanks! he really is amazing at his funniness! good guy, too.

He sounds like a very cool guy, and that first picture is great! You can really see a definable character.. Thanks for sharing.
Oh, and thanks for commenting too!