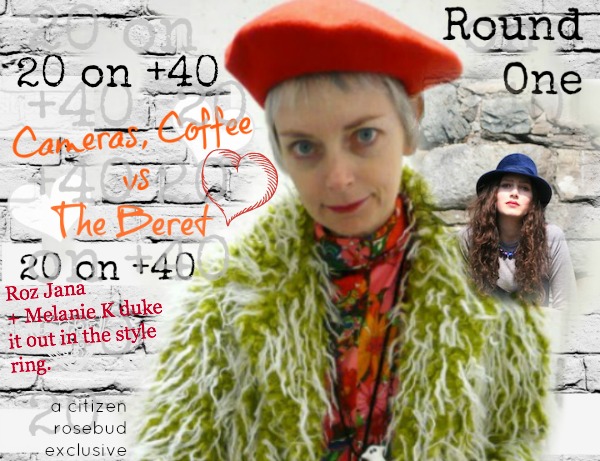 20 on + 40
Note:  To showcase the wide appeal of +40 bloggers that goes beyond their own age-group, I'm starting a new blog  feature, the 20 on +40. This feature will showcase 20 other friends in the community who pick their favorite +40 blogger, interview them, and write about it.  This is the second of the series.

Canadian beauty, +40 style blogger Melanie is an artist from Vancouver. Her personal style blog, A Bag and A Beret hit the ground running last year, and her voice, style and face made powerful impressions on anyone ever visiting her blog. Thoughtful, introspective explorations of style ala Cindy Sherman and Mel's artistic flourishes of dress hang seamlessly with her nearly model good looks. It's a powerhouse style impact: bold dressing on her lithe figure, and that unforgetting piercing blue stare.

Decades apart, and across the Atlantic resides a certain Roz Jana, a 17 year old  fashion wunderkind, who already has been peeped at from around the world on a slew of street style blogs. This teenager  has written expertly on the subject of fashion for the likes of Oxfam, The Guardian and British Vogue.  Like Mel,  her leggy figure and gorgeous face could easily be confused for that of an off-duty model, but Rosalind's interests seem to lie elsewhere.  As good as she looks in front of the camera (you can see how good on her blog, Clothes, Cameras and Coffee) it seems apparent that Roz would rather be behind it, or at least behind a  good typewriter, clacking out in resounding Querty beat, her thoughts on fashion, feminism, and  taking a poetical turn at her arts + letters. Clearly, these two are kindred spirits. 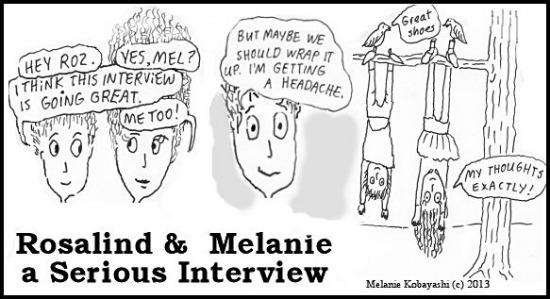 So it came as little surprise, when I asked Roz to interview her favorite +40 blogger for this series, that Roz picked Mel in a heartbeat. What did surprise, however, was how they both wrestle with body image, artistic ambitions,  and their take on the fashion industry.